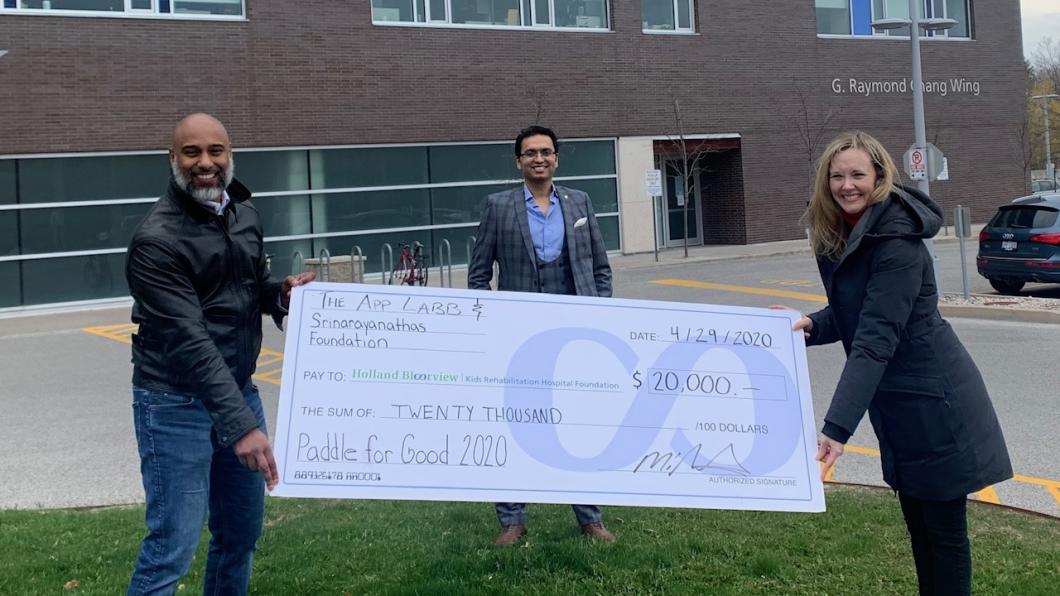 It was the final game of the day: winner takes all.

The cheering was getting louder, the paddle swings stronger. Back and forth, back and forth. The tension was high.

But there it was, with a final hit, game, set and match.

In a final sudden death round, TheAppLabb had won the inaugural Paddle for Good charity ping pong tournament.

And with their trophy was a donation of $20,000 for Holland Bloorview from the Srinarayanathas Foundation.

When Muraly Srinarayanathas realized that many companies had access to ping pong tables in their offices and used them to unwind throughout the workday, he set out to create a fun initiative that would also make a change. And his personal love for the game helped—he and his wife had their first date at Spin Toronto.

And as the deputy chair of the Srinarayanathas Foundation he was excited to see what a great success Paddle for Good became.

“I’ve been involved with a number of non-profits and fundraisers, but I really wanted to have something exciting within the downtown, especially the tech scene, because I felt like everyone has a ping pong table,” he says.

This year, Paddle for Good saw five corporate teams go head to head at Spin Toronto for a chance to win a donation from Muraly’s non-profit, the Srinarayanathas Foundation, for their charity of choice.

“Instead of just highlighting one particular organization for the event, we thought, why not get each company that's participating to, you know, share information about the non-profit or organization that they're supporting so that everyone hears about it?” he says.

“Not everyone is going to win the prize but there's also this information about what each organization is doing—in our city, in our backyard. Everyone really got a chance to hear about who they were representing and what they were doing, which I thought was great.”

While COVID-19 originally dwindled the team numbers from 10 to 5, Muraly admits that the tournament—which was held on the last weekend before the province of Ontario went into a state of emergency—was truly a memorable moment of life pre-pandemic.

For Kundan Joshi, the CEO of TheAppLabb, the tournament seemed like a fun way to engage his staff. And when the original call-out for participants saw 35 staff members signing up, Kundan saw just how engaged his team could be.

“Even though the goal was [to have] a lot of fun, we just had a blast preparing for it,” he says. For six months, his team prepped and had in-office competitions to see who would represent the organization at the tournament.

On the day of the tournament, Kundan recounts how his team had lost the first round of games, but eventually had hit a streak, catapulting them into the finals. In the final match, TheAppLabb was facing equally competitive opponents who made the road to victory an exhausting one.

And while Kundan saw their weariness, a little pep talk helped them when it came to crunch time.

“But guess what? If we lose this the other team is supporting a charity, as well. So, the most important thing is to just enjoy the game, because win or lose the outcome is going to be great.”

Kundan, who had previously visited the hospital and networked with Sandra Hawken, Holland Bloorview Foundation’s CEO, saw first-hand the impact the hospital has on kids and youth with disabilities. And knowing he and his team could make a positive change to help give kids healthy futures and lives, he was excited to bring home the gold.

“It was funny, because we were having so much competitive fun that I forgot to text [the Foundation’s CEO] that we had made it to the finals and we had a chance to winning and bringing the money back to Holland Bloorview,” Kundan adds with a laugh. “So, I texted her and said let’s see how it goes.”

And for TheAppLabb, seeing where it goes meant getting the gold.

“I am so grateful for Muraly—for creating such a fun and philanthropic event—and Kundan for choosing Holland Bloorview as his team’s beneficiary,” says Sandra.

“Their generosity and support, especially during such unprecedented times, is greatly appreciated and will make such a difference in the lives of our hospital’s kids and families.”