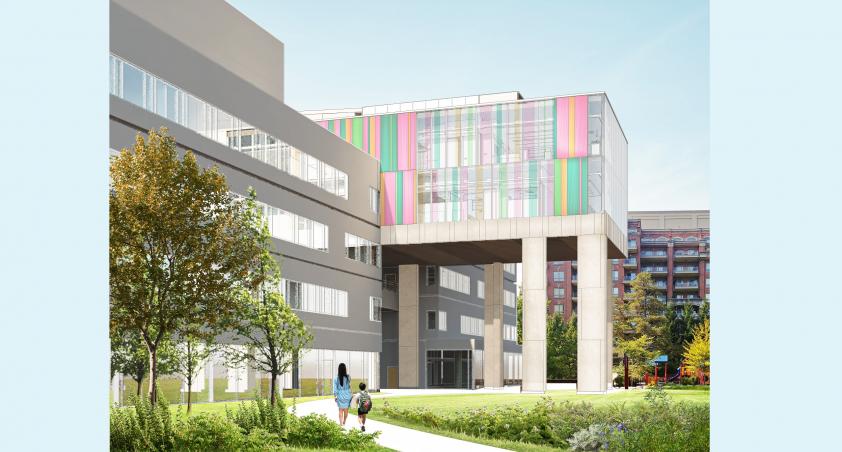 We are thrilled to inform you that construction on the 11,000 square foot addition to the back of Holland Bloorview has begun. This two-storey addition will be built on floors four and five, and will connect to the Bloorview Research Institute's newly renovated research space by a 'front porch.'

As you know, this is the final phase of a three-phase capital project to support the Grow Holland Bloorview Research strategy.

Below are Frequently Asked Questions about the expansion.

Thank you for your understanding and patience. For updates on construction and more details about Grow Holland Bloorview Research, please visit GrowHBResearch.ca or email us at: growhbresearch@hollandbloorview.ca

Holland Bloorview is a children’s hospital. You conduct research too?
Yes! In addition to serving more than 8,700 children with disabilities, we are a world leader in childhood disability research, home to the Bloorview Research Institute (BRI).

How is this addition being funded?
The Grow Holland Bloorview Research campaign is funded 100% by donors.

Where are you building this  addition?
We are planning to build the  addition on the north side of the existing hospital building.

Why are you applying for a minor variance to the zoning by-law?
Although the size of the proposed addition will stay within the existing zoning by-law requirements, we are required to submit an application to the city to make changes to the footprint of the building.

We will be working closely with our construction management firm Buttcon Construction Limited to minimize any noise disturbances.

Does the hospital have any further plans to expand the building in the next 5 to 10 years?
One of the objectives for this project is to create a space to meet our current and future research needs.

At this time, we do not have any plans to further expand the building. Any further expansion would require additional approvals and consideration by the City..

Why is the addition on the north side of the building? Were other locations considered?

Yes, other locations were considered.  Prior to deciding on the proposed location for the addition, the hospital conducted a feasibility study assessing six other possible locations on the south, east and west sides of the building. With the exception of the proposed location, all other potential locations presented significant barriers including structural, operational, safety and financial considerations and were deemed not feasible for this project.

Why is the addition located up at levels 4 and 5?

Locating the addition at levels 4 and 5 was an important consideration during the feasibility analysis.  The proposed location directly connects to the existing Bloorview Research Institute.

The existing renderings show the east side building - does the west side look the same?
No. Although the west façade will have similar characteristics to the east side to ensure design continuity, the design (including the colour palette) will be considerably more subtle than the east façade. Our architectural team is working on finalizing this design and we will share a rendering with the community once complete.

Will the addition have a similar aesthetic to Holland Bloorview’s existing building?

The form of the addition is dictated by the need to connect directly to the fourth and fifth floors of the hospital. The east side of the addition will be overlaid with colour taken from the colour branding used by Holland Bloorview, which originates from the scattering of colour glazed panels used on the exterior of the existing building.  The addition strives to be distinctive but still connected to the overall look and feel of the hospital.

Will the addition be illuminated at night?
The City policies restrict the lighting of any new project to reduce light pollution. All new buildings are required to demonstrate that they align with these policies.  We will ensure our project aligns with the city's policies.

How will the addition affect parking in the neighbourhood?
Because the size of the building is within the permissions of the existing zoning by-law, we do not require a change to the parking requirements in the zoning by-law.

Will the large trucks delivering materials be housed in your parking lots rather than parked on the street?
Yes, as much as possible, deliveries will occur on our loading dock or in the parking lot.

We are concerned about the speed of some drivers along Kilgour Road. What are you going to do to keep people driving at the 30 km speed limit?

We are also concerned about the speed of drivers on Kilgour Road and the safety of our clients and families and community members. Our construction management firm, Buttcon Construction Limited, will be monitoring traffic and speed on Kilgour Road, as it relates to the construction.

Holland Bloorview will also be reminding staff, and clients and families of the speed restrictions on Kilgour Road. We are committed to collaborating with the community to ensure safety.

What noise disruption can we expect during construction?

What strategies are being taken to eliminate or mitigate the hazard the addition will create for the large number of birds in this area?
The source of the hazard to birds coming from buildings comes primarily from windows, particularly when they are lit at night, or when they reflect their surrounding during the day.

Our design addresses this by including a printed ceramic frit pattern on the surface of exposed glass surfaces or a painted aluminum screen, in the form of louvers on the east side of the building and perforated panels on the west side.  These finishes will indicate to birds that the glass is a surface that they cannot fly through.

Contact us for comments or questions about this project