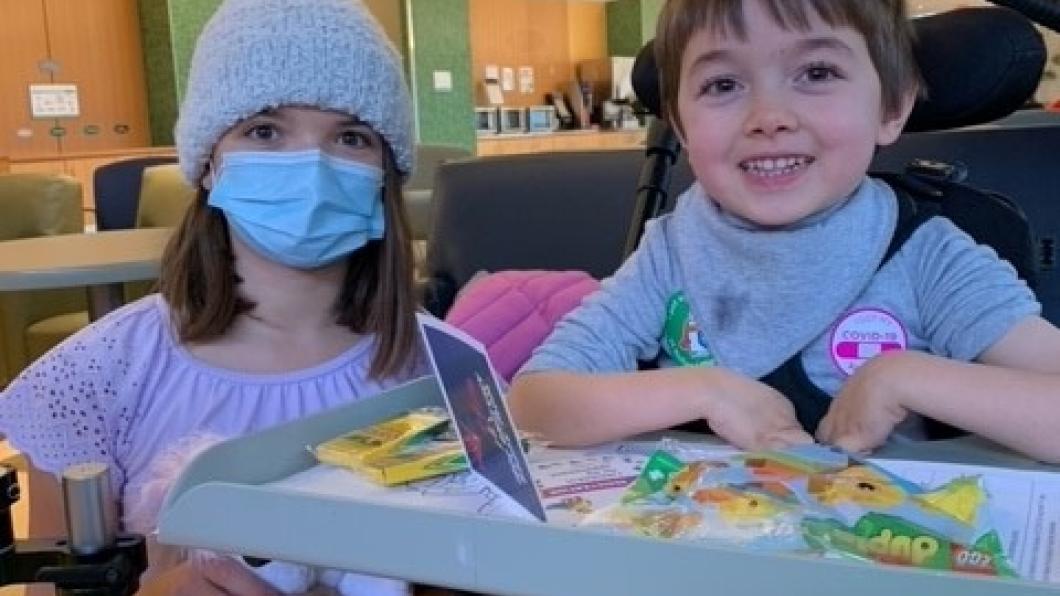 Two Super Mario Brothers have a big fan in six-year-old Gabriele, who plays the video game any chance he can get.

Gabriele lives with neuromotor disorder symptoms. He uses special controllers where every button and control stick is separated, so he can place them in just the right spot to guide Mario and Luigi through their coin-filled adventures on the road to Bowser’s castle.

Gabriele (pronounced Gab-ree-el-eh), a Grade 1 student at the Bloorview School Authority (BSA), has symptoms similar to dystonia and cerebral palsy but has no diagnosis. His core muscles, hands, mouth, and feet have low muscle tone, yet he has high muscle tone elsewhere. This makes it very difficult for him to coordinate movements and balance properly.

“When he was a baby he was kind of ‘floppy’, and we started noticing that he wasn’t meeting his milestones,” explains his dad, David. “Today, Gabriele uses a wheelchair and can use a walker with assistance.”

Gabriele also uses a Tobii Dynavox Eye Gaze speech device, which uses eye movement to select words and phrases on a screen to help him communicate. “Gabriele can talk, but sometimes it can be difficult to understand what he is saying, so this device really helps ensure we know what he wants and needs,” says David.

In addition to Super Mario, Gabriele also loves his older sister Siena, who is nine and looks out for him as only a big sister can. If he managed the family’s kitchen it would be pasta every day, no doubt thanks to the culinary talents of his father, a chef who worked at a popular Italian restaurant in Toronto.

While Gabriele’s current favourite TV show right now is “The Floor is Lava” he’d likely much rather watch ocean life – because he wants to be a marine biologist.

“One weekend, we were talking about Gabriele's love for sharks and other marine animals. He received a marine life encyclopedia for his birthday and had been reading it for quite some time,” says David. “We said to him that perhaps he could become a marine biologist and study sharks when he's older. He smiled.”

David says that everyone went about their day and soon forgot about the conversation. The next morning, over breakfast, Gabriele turned to his mom, Jennifer, and asked: "How do you spell biologist?" He had written "I want to be a marine..." on his speech device, but couldn't get the last word down.

To tap this new passion, Gabriele’s parents showed him websites for the University of B.C. and Hawai'i that could lead him toward such a career. Just before the pandemic, Gabriele got to see marine life up close during a whale watching trip in Mexico.

“Seeing humpback whales was an incredible experience for him,” says David. “To watch these animals so close, in person, was amazing. We talk about it all the time.”

Gabriele is a bright kid who clearly loves to learn. He enjoys going to school every day at BSA, where he participates in integrated education and therapy (IET), a partnership between Holland Bloorview and the BSA. This therapy model focuses on accessibility for all students to support safety, inclusion and health while helping kids learn how to participate and perform in a class setting.

“We’re so grateful to have him at Bloorview School Authority,” says David. “He loves his teachers, his friends, and bringing home books about sharks from the library every Friday.”

The family’s goal for Gabriele is to help him gain as much independence as possible. “We realize that he may not be 100 per cent independent in the future, but feeding, toileting, gaining confidence in his walker – these are all things that the physiotherapy and occupational therapy he’s received both at Holland Bloorview and at home are helping him to do,” says David.

For the future marine biologist, swimming is most certainly in his future too.

“One thing Gabriele has loved is the swimming pool at Holland Bloorview,” says David. “We can’t wait to get him back in the pool – and also back to Georgian Bay where we have a cottage. He loves playing on the beach.”