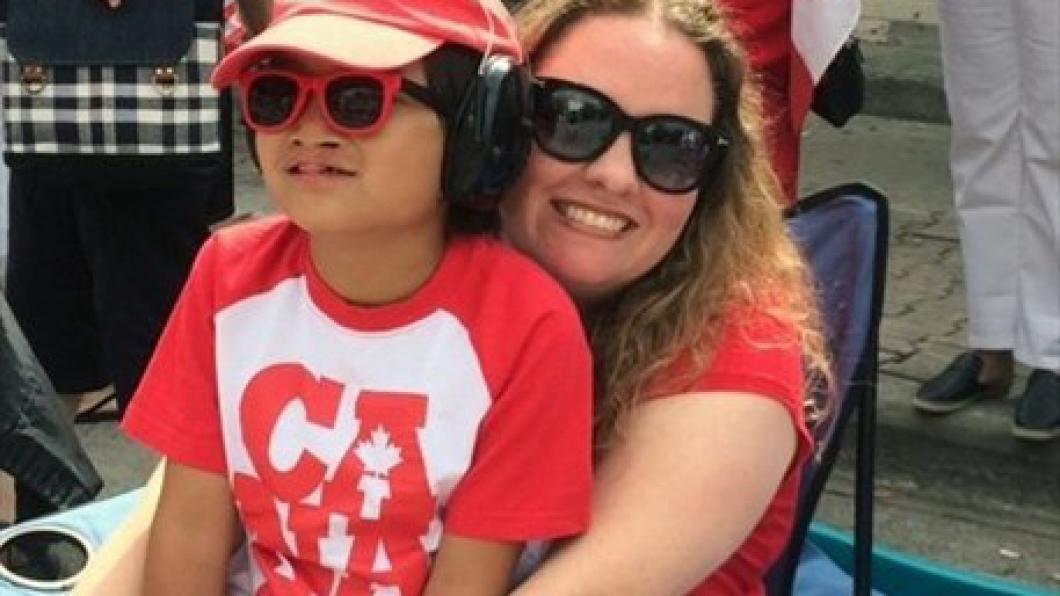 'There's no 911 for our families,' says mom of son on autism program waitlist

Last month Stacy Kennedy parked her van in front of Ontario Premier Doug Ford's constituency office and camped there for seven nights. "There's no 911 for our families," says the Oakville mother, whose son Sam, 10, is autistic and has never eaten food by mouth due to a severe oral aversion. Sam is one of over 49,000 Ontario children on a waitlist for services like occupational and speech therapy and applied behaviour analysis (ABA). Since Sam was diagnosed at age six, "I've advocated for every possible health-care support available to us and they were all denied because he has autism," Stacy says. "For four years we've been passed along and that's how I ended up in Doug Ford's parking lot." We spoke about Stacy's experiences raising Sam.

BLOOM: Tell us a bit about Sam as a kid.

Stacy Kennedy: We describe him as this joyful ball of energy who is incredibly loving and the best thing that ever happened to the family. Sam is autistic and has some developmental delays.

BLOOM: What does he enjoy?

Stacy Kennedy: He loves nursery rhymes and watching cartoons in different languages. My mom introduced him to Disney characters and Mini Mouse and Daisy Duck are his favourites. The wonderful thing about an iPad and Disney+ is you can watch Mickey Mouse Clubhouse in a multitude of languages. Sam is partially speaking, and we speak many languages in the house—three and sometimes four. He enjoys watching in Polish or Russian or Ukrainian or Spanish, which my husband speaks. There's a really great bilingual cartoon from the U.S. called Ni Hao Kai-lan that's in English and Mandarin that Sam loves.

BLOOM: How does he communicate with you?

Stacy Kennedy: Mostly verbally. With one or two words or the occasional short sentence or phrase. We've tried PECs and AAC and he hasn't shown a lot of interest. He's much more interested in using his verbal voice. We're slowly starting to teach him to type, so as he progresses he might use a small handheld device to have a voice. Sam loves speaking about his schedule for the week, what's coming up, or what's happened. He likes the solar system and talking about the planets.

BLOOM: Is he in school right now?

Stacy Kennedy: At the beginning of the pandemic he did school virtually and it was not a success for him. We were lucky enough that when they opened school for kids with disabilities, he and about five of his peers of different age groups were welcomed back into school. He's a kiddo that craves in-person connection.

BLOOM: What has been most challenging about raising him?

Stacy Kennedy: Being the mom of Sam is not hard work. Navigating the system, especially the health-care system, is hard work. When your child is diagnosed with autism you're put in the autism funding bucket and on a waitlist, and it's very hard to get out and navigate other services. An example is as a SickKids patient, Sam has a clinic program that is there to help us navigate services. But when we're referred outside the hospital for programming like occupational therapy that would be available if Sam had cerebral palsy or cystic fibrosis, we can't access it because he has autism. He's siloed onto a waitlist specifically for autistic kiddos.

BLOOM: So right now you're currently paying for services privately.

Stacy Kennedy: Yes. The clinicians have suggested that Sam should receive 12 to 16 hours of ABA a week and about eight hours a week of occupational therapy for his feeding issues. We're currently paying for six hours of ABA a week at $55 an hour, which works out to about $1,300 a month. Occupational therapy is $150 an hour, so we haven't been able to do that in a month or two. For my son to have feeding success he needs intensity. He attended a wonderful half-day feeding camp for five days in July and it was on the fifth day when we started to see success, and then it stopped.

BLOOM: What are Sam's feeding issues and how do they impact his life?

Stacy Kennedy: He has a major food aversion and a severe oral aversion. He was born with a bilateral cleft lip and palate, so he had several surgeries before the age of two that made him incredibly sensitive in that area. He essentially has a fear of food and it's a big stressor or trigger for him. Once we had an OT who we felt was really listening to him we changed our strategies to accommodate his fear. So he drinks a prescribed nutritional formula by cup. He drinks it four to six times a day and we noticed a huge change in his stress levels.

BLOOM: You mentioned he needs surgery but he wouldn't be able to tolerate the oral procedures to prepare for it.

Stacy Kennedy: He needs an oral bone graft which is the next step in treating his bilateral cleft lip and palate. That surgery would increase his speech clarity and oral function and improve his craniofacial difference. But first he needs to overcome his oral aversion.

BLOOM: I read this CBC piece last week, and it said that 2,004 of 49,431 children registered in the Ontario Autism Program have been 'invited' to receive funding for core clinical services. I was struck by the word 'invited.'

Stacy Kennedy: If a health care professional refers you regionally to receive services because of an autism diagnosis, you're pushed onto a waitlist and you have to be invited to access services. It's like a lottery.

BLOOM: Given the services you outlined that would be ideal for Sam, what would that cost on an annual basis?

Stacy Kennedy: It would be $60,000 to $80,000 a year. But even if Sam was removed from the waitlist, the program he would get wouldn't be based on his needs, because there are age caps in the funding. The older your child becomes, the less funding you receive. The highest allocation is from zero to three and another is from four to nine. Because Sam is 10, about to turn 11, he would receive less. Of course the program is only available until the age of 18. Autism doesn't end at 18, but the health-care system treats our kids that way.

BLOOM: You did receive one-time funding of $5,000, but that doesn't come close to the costs of his therapy. How do you currently afford his services?

Stacy Kennedy: We run a tight ship. We're very frugal. Money that we used to allocate to car payments or vacations now goes to therapy. We are providing well below what his clinical needs are, but you do the best that you can. You sell whatever you can. You pinch every penny and you hope nothing big happens in the family.

Stacy Kennedy: My husband and I are campers and we occasionally overland, where you take your vehicle into the woods, so I had all of the equipment in terms of being comfortable with sleeping bags. On the first night I hardly slept a wink because it was a new environment. But then I met the neighbours that lived around that parking lot and I started getting visitors, and it brought out the best in humanity.

I did it politely and respectfully and it brought the message to the forefront, not just for my family, but for the tens of thousands of families, or hundreds of thousands of people with disabilities who experience these roadblocks in Ontario every day.

BLOOM: A reporter asked Premier Ford specifically about your situation in a news conference, and I believe you tweeted that he later called you.

Stacy Kennedy: Yes, what he said to me was similar to what he said during the press conference. He said he was heartbroken about our situation. I respectfully said 'I don't want your heartbreak, I want your action. You don't understand the systemic barriers families experience as a result of the policy changes you've made. The financial reports that are released to us quarterly tell us your government is not spending the money in the budget. I'm a mother who has a child who has never eaten food, and I can't access services.'

He said the cabinet minister would be in touch and he wished me good luck. I spoke to Children, Community and Social Services Minister Merrilee Fullerton and I'm continuing to speak to her staff about accessing services. So there's been a little progress in terms of an ongoing discussion.

BLOOM: But nothing tangible?

Stacy Kennedy: No. We continue to pay out of pocket.

BLOOM: What do you do as a parent to take care of yourself, given so much is out of your control with the funding?

Stacy Kennedy: I'm like every other parent. I have high highs and low lows. I think I'm 10 steps ahead and then a door is slammed in my face and I spend a weekend in bed. I watch movies and if I feel like communicating with people I might text or call a girlfriend in my hometown of Montreal. I allow myself to cry and to experience some moments of depression with the support of my family.

I walk in our neighbourhood, which I find very therapeutic. We have wonderful trails where we live in Oakville. The woods are our church. I still enjoy good chips and dip to help in those tough times. I give myself a lot of affirmations and I try to surround myself with people who lift me up.

We also have my mom, so we have our network of three adults. My mom and Sam are BFFs. They managed while I was at my sit-in. My husband would come to resupply me every day and remind me why we were there and of all of the roadblocks we'd had. We have good talks about how difficult this has been and we reach out to mental health support for us as a couple.

BLOOM: If you could change one thing in children's rehab for Ontario children with autism, what would it be?

Stacy Kennedy: I'd like professionals to have the moral courage to speak up and out more. I've had so many conversations behind closed doors with program leaders and administrators who have talked about being defunded, yet they've never talked about it publicly. We need the bigwigs, the administrators of hospitals, to come forward and speak out as they have on pandemic issues. If we came together as a group, we could make a huge change.

BLOOM: What are some of your greatest parenting joys?

Stacy Kennedy: Kitchen dance parties and sing-alongs in the car. We have a Sam playlist. One favourite is Life is a Highway from the Cars movie. I have corrupted him into loving ABBA, so Mamma Mia is a huge hit. Shake it Off by Taylor Swift is a wonderful sensory experience because you're shaking a lot. And Sugar by Maroon 5 is on there.

Like this interview? Scroll down to the blue banner and enter your e-mail to sign up for our monthly BLOOM e-letter.